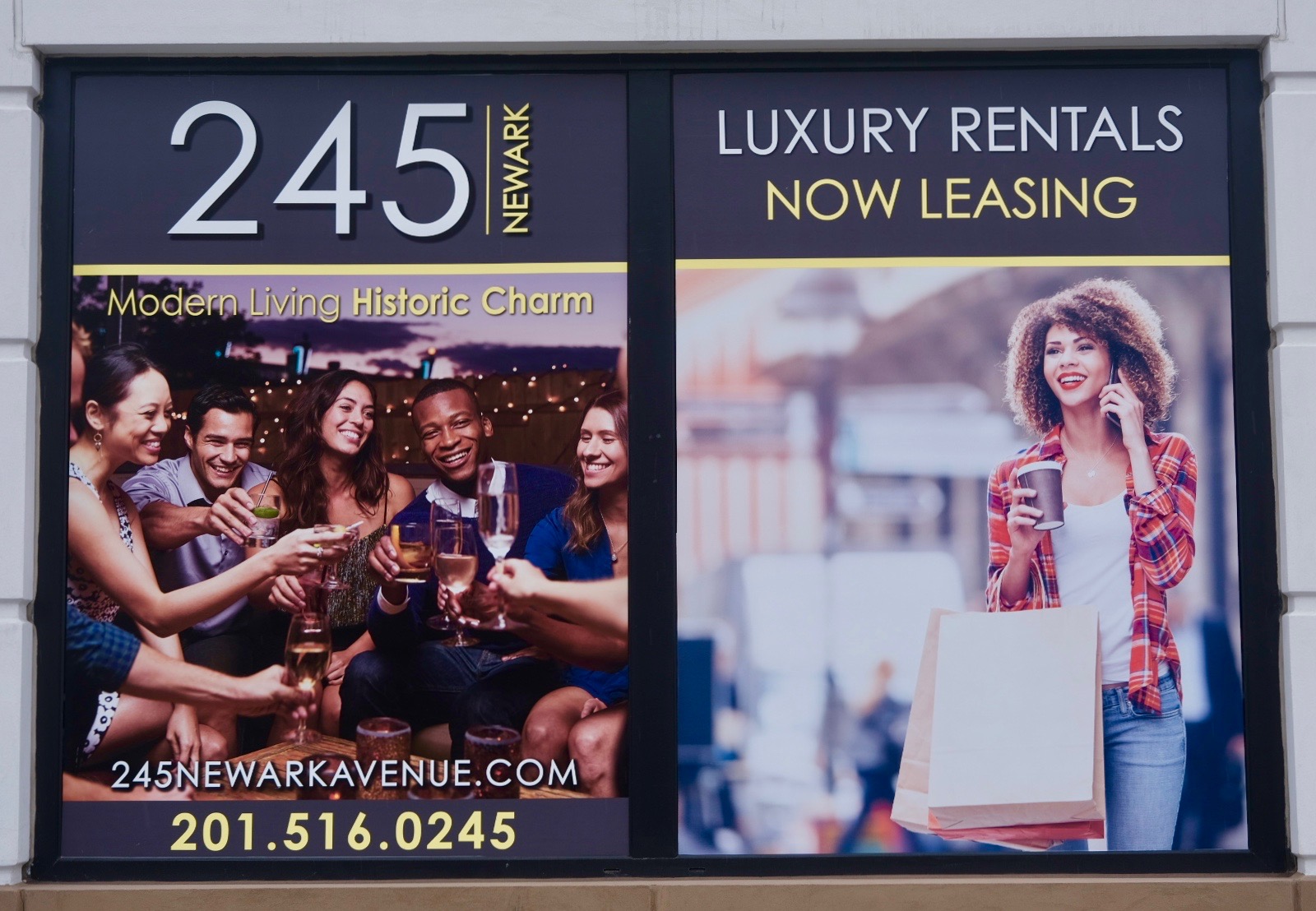 This is the second of a four-part series. For part one, click here.

That summer Mocco was also putting up a five-story building at 245 Newark Ave. in the Village.

Neighbors reported debris and pieces of foam raining down from the building. The foam blew into nearby lobbies and accumulated in the storm drains. As it turned out, Mocco was covering the building with the same EIFS he was using at 333 Grand St. And like at Grand St., the use of EIFS in the redevelopment area was prohibited.

Architect and President of the Village Neighborhood Association, Eric Hofmann, says the facade was “appalling.”  But he noticed something else about the building. “It looked taller than what was approved.”

Hofmann was on to something. Four apartment owners in the “Cheesecake Lofts” building next door realized that Mocco’s building was now blocking views from their roof deck. With a little investigating it soon became apparent that 245 Newark Ave. was seven stories high, rather than the approved five. Mocco had essentially doubled the height of two of the floors in order to give the apartments on those floors interior “mezzanines.”

In addition, Mocco had more than doubled the size of a retail space, hoping that he could create a massive restaurant along the lines of his Zeppelin Hall in Liberty Harbor North.

When locals confronted Mocco at a Village Neighborhood Association meeting, he was blasé. One person in attendance, who asked to remain anonymous, remembers Mocco saying in substance, “My guys came to me and said these apartments would be great with mezzanines, so I said ‘go ahead.’”

Mocco tried to spin the changes as benefits to the community.

Meanwhile, back at 333 Grand St., Mocco was forging ahead with construction despite repeated assurances from the city that it would issue a “stop-work” order.  Mayor Fulop told the Downtown Coalition of Neighborhood Associations that the city “won’t be allowing any occupancy of the building with CO [certificate of occupancy] or anything of the sort until resolved.”

And with pressure from the community building, Nick Taylor, Jersey City’s zoning officer, said he would assess a daily fine of $2,000 for Mocco’s violations at 333 Grand St.

If threats of a work stoppage and fines were a major concern for Mocco, it isn’t evident from any of the documents that Jersey City Times has been able to review. Instead, it appears that Mocco was focused on convincing the city that it should retroactively sign off on his “deviations” to the plans and give him a temporary CO that would allow him to begin renting out apartments.  This would take some good lawyering and some sympathetic ears, but it was doable as Mocco had used legal proceedings to great effect in the past.  Why should this time be any different?

The strategy quickly paid off. On April 30, Zoning Officer Taylor wrote to Mocco with great news on 245 Newark Ave.: The mezzanines, which had added the equivalent of two stories of height, didn’t count as stories at all. For legal purposes, Taylor wrote, the building was still only five stories. Mocco had dodged another bullet.

When the VNA caught wind of Taylor’s letter, it hired local attorney Cynthia Hadjiyannis to file an appeal with the board of adjustment, the body with the power to review the zoning officer’s interpretation of the law.

The board heard the VNA’s appeal on July 19, 2018. Hadjiyannis’s expert witness, architect Cecilia De Leon, explained that Taylor had miscalculated. The mezzanines did in fact count as stories under the applicable law, making 245 Newark a seven-story building after all.  This was on a site zoned for five-story buildings. 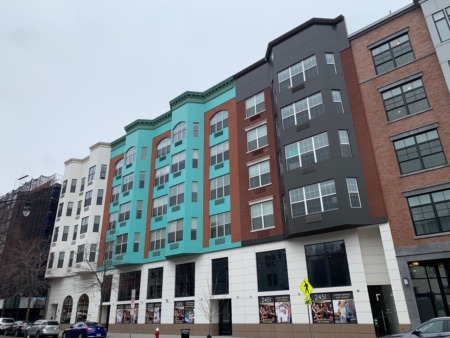 The board agreed. Its decision was scathing in its bluntness. “The Board does not uphold the zoning officer’s determination or any part of his determination.”

Mocco was ordered to remove the EIFS façade, subdivide the massive retail space, and close up the mezzanines to make them useless. He also reportedly agreed to pay Cheesecake Lofts $100,000 for the loss of its residents’ views and had to remove the roof deck at 245 Newark.

Five days later, Mocco went before the planning board to plead his case on 333 Grand St.

At the outset, the developer made an important concession to “restore the penthouse … to what had been originally approved in 2015.” But as to the other changes — which included adding balconies and a swimming pool, enlarging the building’s footprint and using EIFS —Mocco was holding firm.

The community wasn’t buying it. Cecilia De Leon told the board, “This is a seasoned developer with many projects in the city, and he has done this before and will undoubtedly try to do it again.” Architect and planner Gerry Bakirtjy added, “This is probably the most experienced developer in Jersey City. They’ve been doing projects for 35 years. This process of submitting plans, getting approval, ignoring plans, then asking for forgiveness seems to be the course of conduct of this applicant.”

Mocco’s attorney, James McCann, pleaded that the board set its emotions aside. Referring to Mocco, McCann said, “I’m asking you to effectively hold your nose regarding the conduct of any developer.” And alluding to the impending fine, he said that Mocco would be adequately punished by “another arm of the city.” Mocco’s agreement to rebuild the penthouse to its approved, smaller size was “an act of contrition and apology.”

Most of the commissioners condemned Mocco’s behavior. But with his promise to demolish and rebuild a smaller penthouse and the assurance that he would end up paying a substantial fine, the board held its collective nose and voted 5–2 to let his 40-odd deviations stand.

While Mocco had won a partial victory, a new problem presented itself: Taylor had made both the payment of Mocco’s fines—which now came to $582,000—and the demolition of the penthouse pre-requisites to getting a temporary CO.

Without a CO, he would be unable to start renting out apartments and generating income. So four days after the hearing, Mocco fired off an email to Mayor Fulop asking that he overrule Taylor and issue the CO immediately. He said he would pay the fine “today.” In an email four weeks later, he assured the mayor that the “penthouse structure on the 13th floor…will be removed by June 2019.”

Mocco’s emails worked. The pre-condition that he take down the penthouse before receiving the CO was dropped. He could start renting right away. Fortuitously, he had also bought the penthouse more time.

In September, a representative of the Van Vorst Park Association wrote to Fulop expressing concern that by giving Mocco his CO it had lost the leverage it needed to get him to dismantle the penthouse. The mayor explained that it was in the city’s interest to have both Mocco’s compliance and 333 Grand St. on the tax roles.  “We feel 100% confident we are going to achieve both.”