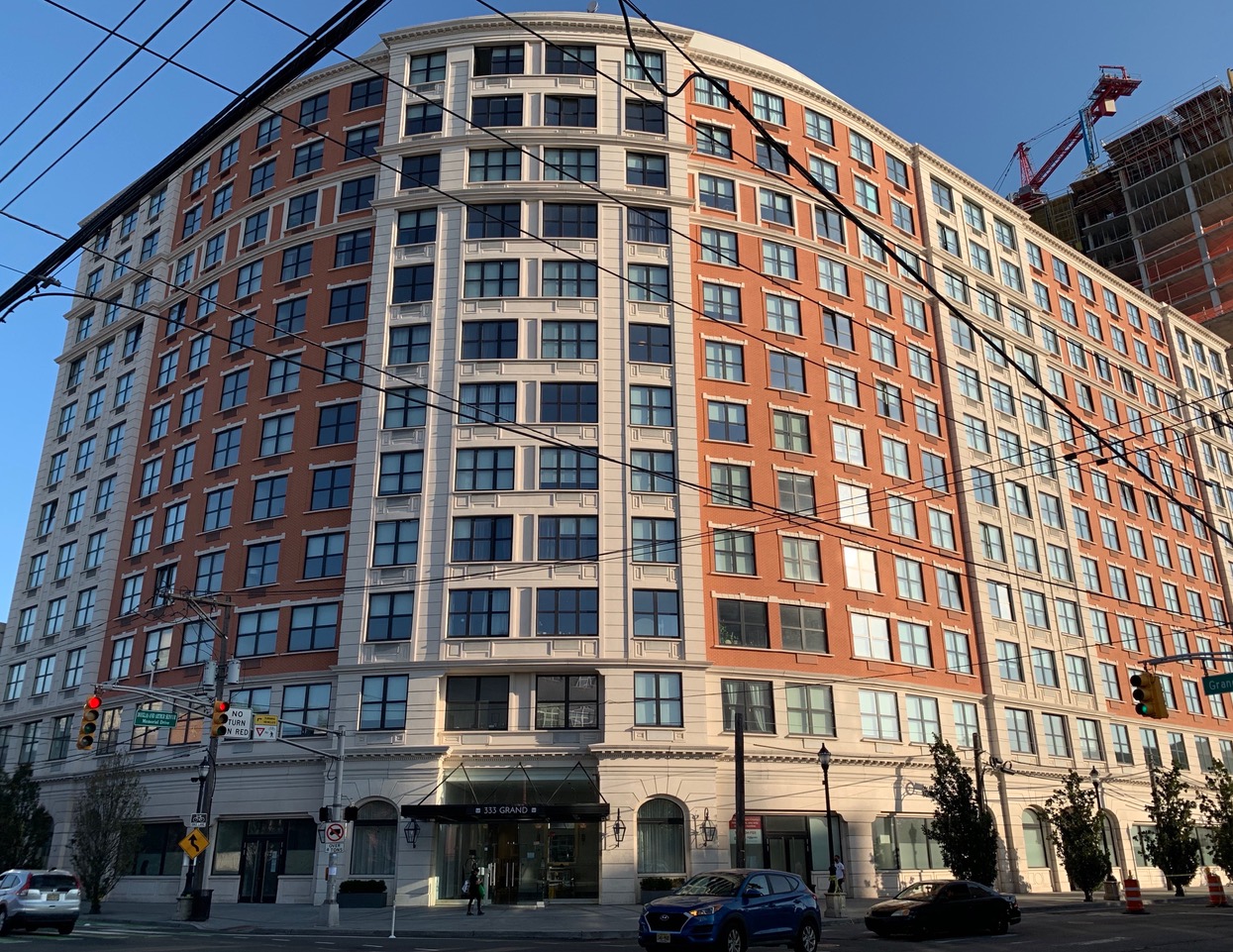 The case of two Downtown buildings completed last year by the notorious developer Peter Mocco has raised serious questions about the city’s commitment to enforcing its own zoning laws. Without approval, Mocco added floors, a swimming pool, changed building materials, and made myriad other substantial changes to the two luxury apartment buildings with little concern that the city would stop him or that he would face serious consequences.

That Mocco was able to flout Jersey City’s zoning laws with little fear of repercussions has caused consternation among neighborhood groups and at least some public officials.

On July 1, 2017, Tony Sandkamp was working in his garden on Bright Street near Van Vorst Park when he noticed white particles falling through the air and onto his plants. “It was like snow in summer,” he recounts.  It was “all over the street and sidewalks.” A cabinetmaker by profession, Sandkamp quickly figured out that the particles were Styrofoam and most likely coming from a nearby construction site.

With a few friends Sandkamp walked over to the site, 333 Grand Street. “We saw guys on scaffold cutting foam. We said, ‘Hey listen, you’re covering our entire neighborhood with foam.’ The workers said ‘we’ll take care of it.’ They sent a couple of people over to sweep our street with brooms.”

Sandkamp would soon learn that the foam was actually something called “EIFS,” an inexpensive product used by builders to create a faux brick exterior on a building. EIFS wasn’t approved for use in Liberty Harbor North. Indeed, the plans for 333 Grand approved by the building department called for the use of more expensive and longer lasting brick veneer. But EIFS has one major advantage over the more durable brick veneer: It is cheap. Locals came to call the building “Foam Depot.”

As it turned out, the use of EIFS was only one of the forty-some building code violations that would soon be lodged against Mocco in connection with the construction of 333 Grand Street.  Among his many other unauthorized changes, Mocco had also added a swimming pool and balconies and more than doubled the size of the penthouse from 5,815 to 12,013 square feet.

Peter Mocco came to Jersey City colorful reputation in tow. In the 70s, he and his brother, Joe, had run North Bergen: Peter had been mayor and Joe town clerk and Democratic party boss. Their influence continued into the 80s only to come to a sudden end in 1989 when Joe was sentenced to 20 years in jail in connection with an illegal garbage-dumping scheme.

In 1992, Peter’s business partner, Jeff Zak, was sentenced to three years in prison for attempting to tamper with the jury in Joe’s trial.

Peter had had his own brushes with the law. His law license had been suspended for one year after he allegedly forged the name of both a business associate and his brother Joe on a legal document.

At one point New Jersey education officials implicated Peter in the firing of seven teachers who had refused to do political work for him. He faced allegations of voter fraud for his role in a 1976 Democratic congressional primary. He was also the subject of a lengthy grand jury investigation regarding his fundraising.

But Mocco had also developed a reputation as a charmer. He was known to serenade senior citizen voters with his guitar. Today Mocco comes across “as a kindly grandfather” according to one person who knows him.

Asked about his background, Mocco would only tell Jersey City Times that he “served as Mayor of North Bergen from May 1971 to May 1979” and that he “retired from all municipal politics and Township municipal activity after May 1979.”

“I went from being a public figure to a private citizen some forty some years ago,” said Mocco.

From politics, Mocco moved on to development. In 1985 he bought the 70 acres that would become Liberty Harbor North from the Jersey City Employees’ Retirement Fund for the princely sum of $880,000, a pittance in today’s prices.

In 1994, following a downturn in the real estate market, Mocco filed for personal bankruptcy. It became one of the largest such cases in New Jersey history with one creditor claiming Mocco owed his firm $70 million. But ever the survivor, Mocco managed to hold on to Liberty Harbor North.

Notwithstanding this history of violations and lawsuits, in February 2001 the Jersey City Planning Board gave Mocco the go-ahead on his ambitious plans for Liberty Harbor North. In what appeared to be a more enlightened approach to development and at the urging of local officials, Mocco brought in Miami-based “starchitect” Andres Duany, a respected critic of urban sprawl and advocate for the “new urbanism.”

The Liberty Harbor North Redevelopment Plan that emerged breathlessly trumpeted a new vision. “When completed, the neighborhood of Liberty Harbor North will perhaps be the most thorough exemplification to date of the principles of the New Urbanism. Due to its high-density housing, its multiple transit connections, its pedestrian-oriented mixed-use streetscape, and its inner-city location, this development is likely to serve as a text book model for healthy urban growth in the future,” read the development’s marketing materials.

The vision didn’t last long. With the real estate market still somewhat depressed from the 2008 financial crisis, Mocco had just the excuse he needed to argue for changes to the plan—changes that would increase the value of his property. Instead of a low-rise townhouse model, Mocco pressed for the right to put up what he said were the more popular buildings of up to 55 stories. In other words, Mocco vastly increased the number of stories he would build and profit from.

Then-Councilman Steven Fulop argued against the changes saying that Jersey City taxpayers should be compensated for increasing the value of the developers’ properties. But in the end, Mocco, aided by the unions, prevailed. Apparently Mocco didn’t return the favor. Today, the unions regularly bring out their inflatable rat to protest his use of non-union labor on the very high-rise buildings they fought for.

Mocco’s legal entanglements weren’t over. In 2013, he filed for personal bankruptcy again when a jury determined that he owed $21 million for 3.4 acres of land along the waterfront. He ultimately settled but not before almost bankrupting the Jersey City Redevelopment Agency. In another mammoth case, this one involving a Liberty Harbor mortgage, a Superior Court judge accused Mocco of “scheming,” “obfuscation” and “deception.”

Afterward, then-JCRA Executive Director Bob Antonicello quipped, “No one has been given more by the City of Jersey City for less than Peter Mocco and has done so little with it.”

Mocco’s reputation for skullduggery is such that Councilman-at-Large Rolando Lavarro recently outed Ward F Councilman Jermaine Robinson for having confessed that he wanted to “follow in Mocco’s footsteps.”

Thus, when the nearby Van Vorst Park Association learned of Mocco’s un-approved changes to 333 Grand Street, it didn’t pull any punches. It fired off a letter to Mayor Fulop charging that Mocco’s actions demonstrated “a blatant disregard by the developer and [the building’s] designers toward Jersey City, its zoning laws and the community.” The VVPA asked for a stop-work order and that no further approvals be granted. Both Fulop and the construction official, Raymond Meyer, said work on the building would stop.

But the work didn’t stop.

This is the first of a four-part series. For part two, click here.