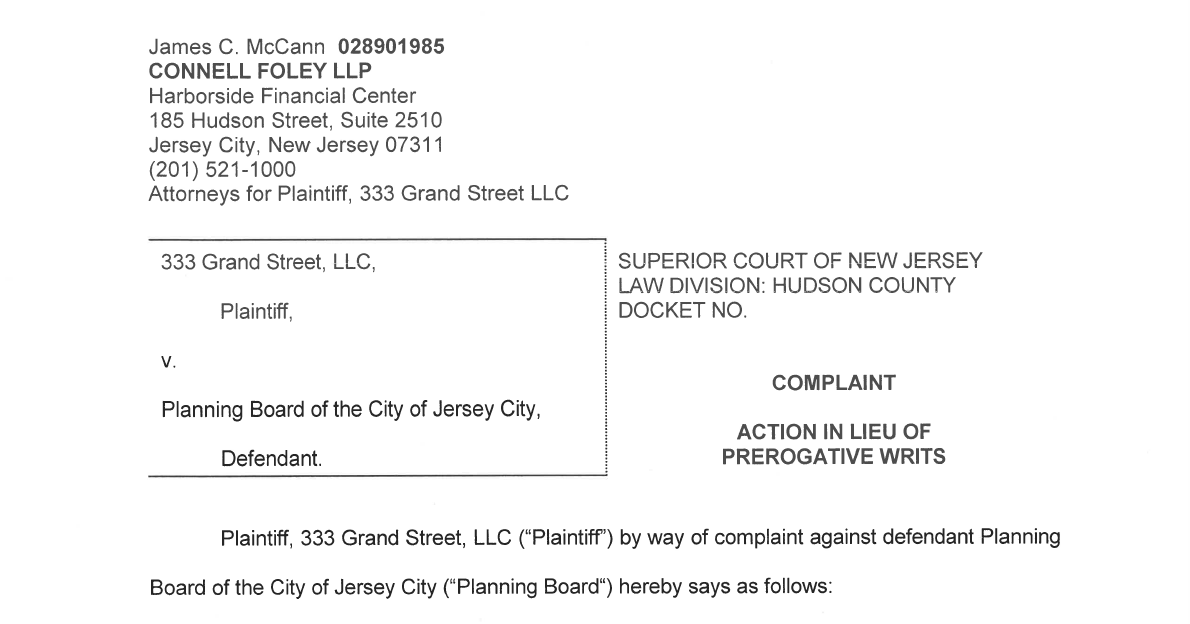 This is the third of a four-part series. For part two, click here.

Mocco was no stranger to reversals. He’d come through bankruptcies, an indictment, and a suspension of his law license. His history was one of forging ahead, pushing the envelope, and wearing down the opposition. Yes, the Board of Adjustment ruling on 245 Newark had been a setback. But perhaps with a little luck, things would turn out differently at 333 Grand Street.

As it turned out, luck was just around the corner.

The massive Liberty Harbor Redevelopment Plan assigned each building one of five classifications dictating the major design parameters like height, internal configuration, number of elevators and size and location of parking facilities. Those classifications would end up working in Mocco’s favor.

At the July 24, 2018, Planning Board hearing, everyone, including Mocco and his attorney McCann, was operating under the assumption that 333 Grand Street had an “L” classification. That meant that the building could have a penthouse but that it could be no larger than 5,815 square feet in size and had to be invisible to someone standing across the street. At 12,013 square feet — more than double its approved size — Mocco’s penthouse was way too big. It was right there in front of you, plain as day, as you stood next to the diner across the street and looked up.

With virtually no cards to play, Mocco had agreed in several emails to the mayor to demolish it in exchange for the temporary certificate of occupancy. This willingness surprised most people.  The cost of taking it down would be substantial. 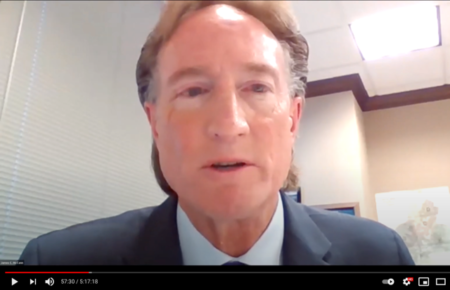 In a February 2019 meeting with McCann, Taylor, Jersey City’s zoning officer, realized that 333 Grand Street had been misclassified. In fact, under its correct “M” classification, a penthouse wasn’t allowed at all. But there was a potential workaround, and Taylor seized on it.  Sure, it would be stretching some common architectural definitions to the point of meaninglessness, but without the workaround, Mocco’s entire penthouse would be toast.

Under the Redevelopment Plan, an M class building could have an “attic story.” If you didn’t read the definition too carefully, it might be possible to call the penthouse an attic. And in an April 17 letter to McCann, that’s what Taylor did.

Like magic, Mocco’s penthouse had morphed into an attic. Now there was no need for demolition or rebuilding. This was the break Mocco had been waiting for.

On October 29, 2019, armed with Taylor’s letter, McCann brought the matter back to the Jersey City Planning Board to argue that Taylor was right — that the 12,013 square foot penthouse, sitting like a cabana on top of the roof, was really an “attic story.” As such, no demolition or alteration would be necessary, since the setback requirement for an attic story was only ten feet, and Mocco’s massive penthouse was set back that far.

The pitch wouldn’t be easy though. In its collective mind, the board had turned a blind eye to Mocco’s 40 deviations because he’d agreed to take down and rebuild the massive penthouse. Now, it seemed, he was reneging on the deal. He was going to make fools of them.

McCann did what good lawyers do when defending the guilty. He acknowledged Mocco’s culpability and suggested that Mocco had now seen the error of his ways. Mocco “created [the] mess,” McCann admitted. But he added that Mocco had paid the $582,000 fine. “The applicant’s trying his best to make amends here.”

The public speakers were having none of it. Tony Sandkamp argued that allowing Mocco to ignore the rules would send a dangerous signal to other developers considering breaking the rules. They would notice that the board “just walked back a decision they made the year before.”

“I just feel like this sets a terrible precedent. It gives the wrong message to other developers where they can come into Jersey City and say, ‘You know what? I’m just going to throw on another amenity floor. I’m going to go on and increase my density even though I wasn’t approved because all I have to do is come in, spend a couple hours in the evening, hire a few attorneys and a few experts, and I’m good to go.’”

Corinne Mulrenan added, “People don’t take you seriously, just so you know. The little guy would never get away with this crap.” 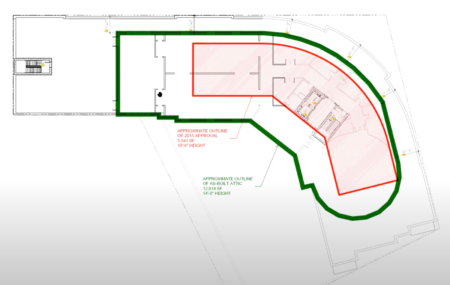 But it wasn’t just the public speakers who lashed out. Commissioner Edwardo Torres ripped into Mocco: “To come here, from a developer from the ’70s as big as this developer is, and to allow these things to continuously happen… it’s been turning my stomach… it gets me nauseous to listen to this from this developer. We sat here and made an agreement in 2018. He comes back to change that agreement…if it was up to me, we’d get rid of the balconies, and we’d get rid of the EIFS [exterior insulation and finish systems], and we’d get rid of that top…It is not an attic.”

Board chairman Langston agreed. “If we’re going to talk about approving a penthouse that wasn’t supposed to be built like this, I want the EIFS back. I want the balconies back.”

Mocco went on to lose the vote 5-3.  He had promised to demolish the penthouse when the board  waived the nearly 40 other violations. He couldn’t back out now, or so they thought.

How to Greenwash a Penthouse

If anyone on the Planning Board thought that their vote was the last they’d hear from Mocco, they didn’t know whom they were dealing with. Litigation had almost always worked to Mocco’s benefit. Why not use it again.

On February 20, 2020, Mocco filed suit against the Planning Board. He claimed its actions were “arbitrary, capricious and unreasonable.” If zoning officer Taylor said the penthouse was an attic, who was the Planning Board to argue?

And indeed, the Planning Board’s attorney doesn’t appear to have argued — at least not for long. In August he agreed to a settlement that would let Mocco keep his penthouse—as an “amenity attic.” But to make the concession more palatable to the community, Mocco would need to make a number of “wellness and sustainability improvements” to the “attic.” They would include converting a storage room to a “tele-conference room,” adding air purifiers and two additional windows, adding UV lights, and putting a community garden, a green wall, a green surface, and a barbecue with tables and chairs on the roof outside. In a side agreement, Mocco would have to forfeit the “attic story” on a future building on Morris Street. 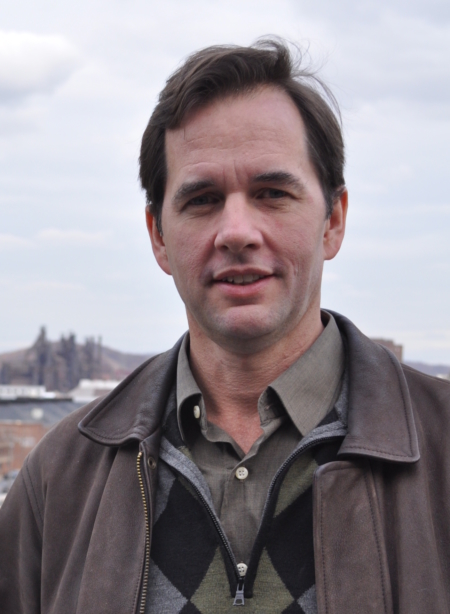 On August 25, the case came back to the Planning Board to give the public a chance to weigh in on the settlement.  McCann methodically laid out the “wellness and sustainability” features they would add, and he again called witnesses to provide their justifications for the penthouse’s being allowed to be reclassified as an attic.

One such witness alleged that the wellness and sustainability measures would “advance the public welfare for future tenants and existing tenants.” There was no mention of a public benefit for the public.

The board listened to McCann’s witnesses with the deflated affect of a team that knows the game is lost. There were a few non-confrontational questions, but otherwise the fight was gone; the fix was in.

When it came time for the public to speak, Tony Sandkamp was there again to weigh in, however quixotically.

“It floors members of the community to think that a developer can just do what they want…if we allow developers to do this, we are essentially telling them ‘do whatever you want, it doesn’t make any difference’…if you run a city that way, you slowly degrade the respect that those developers have for the institutions that make that city viable…if a little guy who’s building a four family adds three feet to a rooftop structure, he’s gonna have to take it down…you can’t have two different governments for people who are wealthy and people who are just regular people.”

The votes were tallied.

Planning Board commissioner Eduardo Torres was the last gasp of resistance. It “hits my gut like a big insult,“ he said. “We should bring everything back to the table and start over.”

Board chairman Langston was the last to vote. He spoke with an air of weary resignation.

“It wouldn’t feel like summer if this wasn’t in front of us again. The only comment I have is given the determination from Nick Taylor, our zoning officer, that the attic is a permitted use, and I’ve taken an oath to uphold the MLUL [Municipal Land-Use Law], so I don’t think I have really any other choice but to vote ‘aye.’”

The final vote was 6–1 in Mocco’s favor.  Mocco had outlasted and outlitigated the board. He had gambled that he’d get away flouting the zoning rules.  And by hook or by crook he had.

Coming in the final installment, the City Council signs off, and local architects and pols weigh in.

The Circus Grows in Jersey City