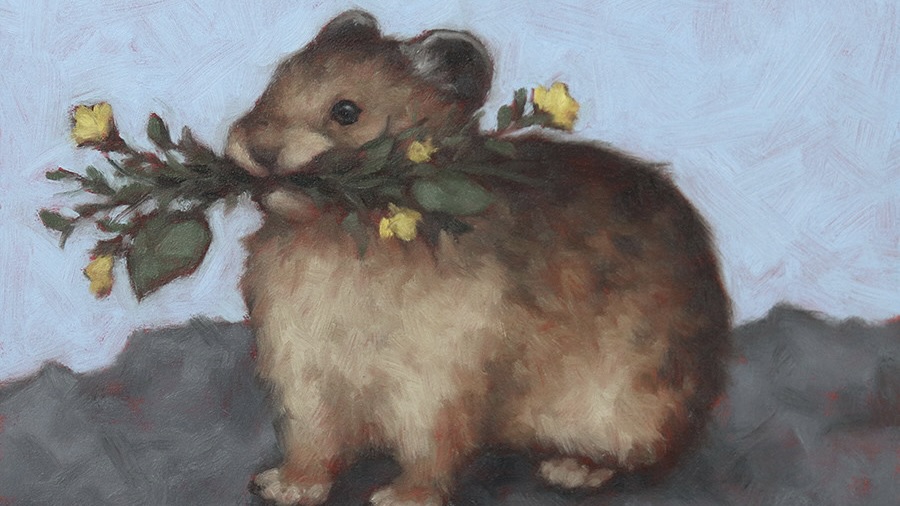 No booth at the Art Fair 14C stands alone. That’s not how the organizers designed the event, and they were wise to amplify the continuity between the styles of the artists they’re exhibiting. The open layout of the forty-thousand square foot Glass Gallery at MANA (10 Senate Place) prompts browsing, and the excellent sightlines at the Fair encourage connections. Cheryl Agulnick Hochberg’s stark, dignified illustrations of Meadowlands animals (booth #D4) are just a few quick paces from Sarah Becktel’s plaintive menagerie of bears, ermines, and pizza-munching squirrels (booth #D21), painted in oil and practically begging humanity for mercy. Loura Van Der Meule’s stunning, large-scale renderings of imperiled urban architecture (#D9) whisper across a divide at Tim Daly’s meticulously captured landscapes in the era of widespread habitat destruction (#D12). It requires no imaginative exertion to put these works in dialogue. They’re already in the midst of one.

Nevertheless, if you’re going to the Fair this weekend — and you really should be — there are a few booths that I wouldn’t want you to miss. These aren’t necessarily the best works on display, but they’re ones that speak in unusual voices, and which might signal forward directions for local visual art. For an event of this size, quality control is extremely high, which is a testament to the thoroughness and curatorial vision of organizers Robinson Holloway, Kristin DeAngelis, Gretchen Von Koenig, and producers Art House Productions, and the depth of talent in the Garden State. There’s really no way to go wrong. But here are eleven ways you could sure go right:

One of the most affecting (and spatially disorienting) exhibits on this year’s Studio Tour was Dot Paolo’s “Monkey Bars,” a photographic peek into a private world composed of plastic miniatures at work and play. Westfield’s Michael Endy is up to something similar. In his “Midnight Circus,” he arranges tiny replica clowns, ringmasters, and hungry-looking lions in tiny, sandy rings, poses fragile acrobats on wires, and floods the images with cold blue and infernal red light. And just to make sure you fall headfirst into his fantasy, he encourages you see the whole thing on a Viewmaster, too. Call it an updating of the Cirque Calder if you like, but Calder’s miniatures never seemed quite so imperiled, or quite so overwhelmed by the cavernous immensity of their surroundings. 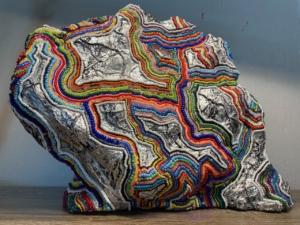 Many of the artists at the Fair, and in New Jersey in general, push toward a synthesis of the hard and industrial and the soft and organic: for years, Megan Klim (#B24) has been fabricating encaustics that ooze and twist and ache like skin does, and Noora Chavooshian and Robert Lach, who’ve both provided highlights to the juried show, explore the line between the natural and the machine-made in sculptural works that manage to be austere and playful at the same time. But I’m not sure I’ve ever seen anybody do it quite like Brooklyn’s Marcy Sperry does. Using beads, acrylic, and thread, she makes sculptures that resemble geodes and sedimentary rock. Some of her pieces resemble fossils; others seem like meteorites broken from a planet of pillows. Sperry’s illusionary work reminds us that the sessile environment is never as firm and unyielding as we sometimes fear it might be. The cold stone world will yield to your touch — if you’ve got the temerity to push a little.

Novado Gallery (110 Morgan St.) has the beautifully appointed interior, brick walls and marvelous sightlines, and unbeatable location in the Powerhouse Arts District. Tiny SMUSH (340 Summit Ave.) has the dancers, the pot-luck suppers, and the boardgame nights. Deep Space (77 Cornelison), the third of the three terrific small galleries in Jersey City, has the peerless crew. Their roster of regulars is ridiculously thick with talent and includes some of the most prolific painters and sculptors in the region, and its proprietors have brought an overstuffed Santa bag of goodies to 14C. These include a pair of canvases from Ru8icon, who just might be the best and most visionary city-scaper around, and some more of those marshmallow-like sculptures from the dreamer George Goodridge. But I was particularly struck by a trio of bricks contributed by contraption-master Andy Ralph. He’s drilled holes in them, and, like some kind of opulent pasta-machine, they appear to be extruding Styrofoam strands wrapped with gold leaf.  How does one gold-plate Styrofoam?  Well, that’s pure Deep Space magic. 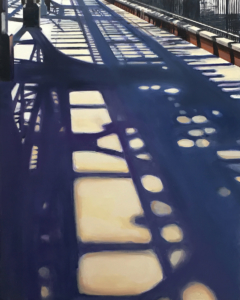 For this visitor, Allan Gorman was one of the revelations of the second Art Fair 14C. Gorman, I learned, is a painter fully present to the rhythms and poetry in industrial design — one who can communicate the beauty at the heart of the engine and the anxieties humming between the lines of the architect’s blueprint. His exhibition at this year’s Fair is even more illustrative than the last one. His sensitivity to the play of daylight and shadow as it happens on urban streets has intensified. Few painters can get banisters, and guardrails, and the slats of fences and panels of windows to sing in such strange and peculiar harmonies. I am sure Gorman would agree that it helps to be from New Jersey.

In the middle of the Glass Gallery space, the organizers have built five tall concrete structures: private rooms devoted to self-contained exhibitions. Given the military associations of the word, I doubt Margaret Roleke would like the setting of her show to be likened to a pillbox. Nevertheless, what you’ll find in there is wholly appropriate to the space. It’s a great rolling sculpture made from spent shells, and as a commentary on the American obsession with munitions and gunfire, it’s pointed, persuasive, and awfully sad. It’s also visually stunning. Unlike Federico Uribe, who also uses ammunition to fashion ornate statues of animals, Roleke’s “Shell Space” bubbles with chaos and pushes its tentacles, octopus-like, against the concrete boundaries of its container. It’s coming at you. Heck, it’s coming at all of us.

If you told me you’ve never spent any time in 2020 and 2021 pondering mortality, I wouldn’t believe you. Trouble has never felt closer than it does right now. It’s the vexed task of the artist to reflect back some of that fear, and nobody dances on the brink of that precipice with the style and poise of Andrea McKenna. It’s not inaccurate to call her works ghost stories: her distressed and oxidized-looking portraits of beautiful, closed-eyed people suggest a transient state between life and death. What kind of existence do you reckon McKenna’s specters have? I’m afraid that’s between you and your demons.

If the movers behind Art House and 14C (and maybe even MANA) are feeling good about themselves right now, that’s not unjustified. They’ve pulled off quite a feat on Senate Place and given Jersey City a grown-up art party commensurate with the amount of talent here in town. But their juried show ought to be a particular point of pride. Some of the most searing pieces in the Fair were selected for inclusion by the judges, and lined up, compartment by compartment, on the south side of the Glass Gallery, they speak with an articulate coherence that belies their varied origins. New York naturalist painter Eunju Kang has a presence in the main exhibition and the jury, which gives visitors two opportunities to wrap themselves in the insular beauty her work radiates. Me, I wish only there were a third. 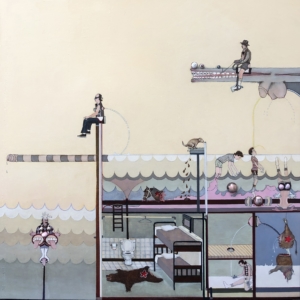 R.J. Calabrese, “Not With a Bang But a Whimper”

From a distance, the nine paintings of R.J. Calabrese’s “Not With a Bang But a Whimper” look awfully beautiful: pastel-colored and nicely balanced, with thin, delicate lines and dotted with doll-like human figures. But the closer you look, the more you’ll succumb to that particular amalgam of revulsion and fascination that accompanies the best horror movies. Some of Calabrese’s subjects are partially dismembered; others are engaging in unspeakable acts; others are hybrids of humanity and fearsome things that can’t be easily named. I’m not sure what Calabrese is getting up to in the Hunterdon County farmhouse where he fashions these works, but whatever it is that’s driving him, I’m pleased he saw fit to share his twisted fantasies with the rest of us depraved folk. 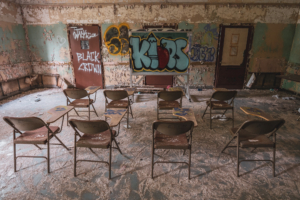 Urban exploration is a delicate business. Ferreting your way into abandoned buildings is only half of the game — once you’re in, you’ve got to bracket your amazement at what you’re seeing and find a way to communicate your astonishment to your audience. It’s very easy to condescend to a disused space, and play things for pure shock value rather than meaning. Alex Gulino of Bayonne never does that. She’s a guerrilla reporter who has gotten the story right. Her photographs are loaded with respect: for the built environment, for our industrial past and our history, for the residue of time and the quiet nobility of decay. But she can knock your socks off with color and composition, too. Attention, all appreciators of the ragged grandeur of disused spaces. You’ve found a balladeer. 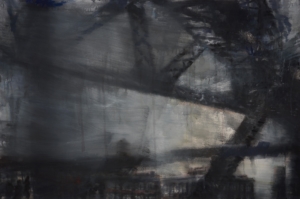 I wrote quite a bit about the two jaw-dropping, tapestry-sized watercolors by Paul Ching-Bor in yesterday’s review of the Fair. Rather than repeat myself, I’ll just say that a respected Jersey City curator told me that when she saw Ching-Bor’s skyscrapers and architectural façades melting into the inkiest night, she broke down into tears.  I’m not sure I believed her at first.  Then I looked for myself, and… well, yeah.

Most of Raisa Nosova’s presentation area is dedicated to glass sculptures that approach maternity and femininity in a manner that simultaneously suggests fragility and remarkable tensile strength. If that was all there was to Nosova’s exhibition, it would still be worth a visit. But I was deeply moved by a piece with no direct relationship to the glassworks: a paper scroll hanging on the wall, and curling at the edges, and decorated by a diagonal line of human-shaped figures, walking into the black white space in rough formation. Some of these paper people were cut from the paper and left dangling, while others cast no shadow in the negative space of the black wall behind the scroll. Had they been selected by fate to leave no trace? At first, I imagined that these were refugees — and perhaps that’s exactly what Nosova meant to depict. She might have intended to give us a portrait of desperate human beings shunted to the margins, barely hanging on, snipped away from the stories of their own lives. But in the midst a Fair busy with expressions of precariousness, environmental and existential, it occurred to me that Nosova’s wan but defiant cut-outs were portraits of the artist, and you, and me, and everybody else who passes through the Glass Gallery in search of a little meaning and enlightenment during a very, very dark time.

Murphy Announces Funding for Transformational Greenway from Jersey City to ...